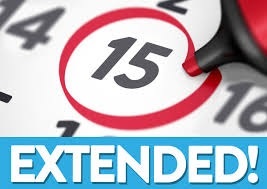 COLUMBUS — Tax Commissioner Jeff McClain recently announced that Ohio will be following the federal government and IRS in extending the deadline to file and pay the state income tax.

The new deadline is July 15, an extension of approximately three months from the original deadline of April 15.

Commissioner McClain said the extension is intended to provide some relief to taxpayers and help offset some of the economic impact of the coronavirus and the public safety measures adopted to contain its spread.

The filing extension, and waiver of penalty and interest, will be available to those filing the Ohio individual income tax, the school district income tax, the pass-through entity tax, and to those taxpayers that have opted in to have the commissioner administer the municipal net profit tax through the state’s centralized filing system.

Individuals, estates, trusts and certain businesses making quarterly estimated income tax payments, have also been granted additional time to file and pay without penalty or interest. The first and second quarterly payments, normally scheduled for April 15 and June 15 for most taxpayers, have both been extended to July 15, 2020.

This includes the Village of Greenwich for State, Municipal and School Districts taxes.

There are no comments yet.

This site uses Akismet to reduce spam. Learn how your comment data is processed.